Sinema made headlines for her speech on the Senate floor reaffirming her support of the filibuster, striking a fatal blow to the Democrat-backed voting bills she herself also supports but bucked her party’s demands to carve an exception to the 60-vote threshold so the liberal overhaul of elections can be passed by a simple majority.

LIBERAL PUNDITS MELT DOWN AFTER SINEMA DOUBLES DOWN ON FILIBUSTER SUPPORT: ‘RESIGN OR BE REMOVED FROM OFFICE’

During Wednesday night’s installment of “Anderson Cooper: 360,” an on-air graphic showed an “R” next to her name instead of a “D.” 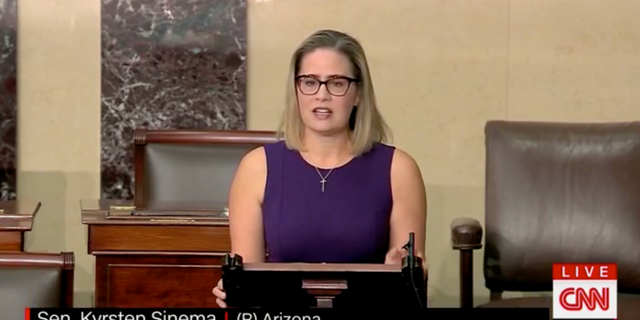 CNN anchor Anderson Cooper, however, did correctly identify her and West Virginia Sen. Joe Manchin as Democrats at the beginning of the segment while covering their meeting with President Biden.

Liberal critics have long accused Sinema and Manchin of being Republicans for not backing Biden’s multi-trillion-dollar social spending bill.

CNN isn’t the only media outlet to mistakenly switch the party of the two moderate-leaning senators.

Earlier in January, Axios issued a correction in an article after it identified Manchin as a Republican.